A New Christmas Tradition: Giving to Beggars and Panhandlers Instead of Each Other

BobPosted on December 25, 2014 Posted in A, Budget, Inspiration-Spirituality No Comments

I’m posting this on Christmas day and so I want to make it somewhat on topic, the problem is I’m not a Christian so I don’t celebrate Christmas. Beyond that, I despise the wanton waste and destruction that Christmas has become and I’ve been preaching against it for a long time. But it’s not good to only be against something without being for something better, so today I want to talk about what I believe is the true meaning of Christmas and how each of us can celebrate it whatever our faith or even if we are atheists/agnostics.

If you want to celebrate the life of Christ, the best way to do it is to live like he suggested we live (I believe it’s critically important to learn from all the Great Master Teachers of the past and even present). We can argue endlessly over his words but there’s no getting around the way he lived and the actions he told us to take like these:

44 “They also will answer, ‘Lord, when did we see you hungry or thirsty or a stranger or needing clothes or sick or in prison, and did not help you?’

By his life and by his words Jesus demonstrated a need to reach out and care for the neediest, worst, lowest and least of our society. Today I want to talk about panhandlers, the beggars we all see constantly on our daily trips through town, and suggest we all start a new tradition of giving gifts to the truly needy instead of to each other who already have so much. I suggest you consider to take whatever you are planning to spend at Christmas and save that to give away throughout the year to those in need. For example, if you were going to spend $365 in gifts, explain to your friends and family that you are giving it to the poor instead. Then get out $30 at the beginning of each month and give that away to the poor either $1 a day to a beggar or as a gift to some charity that works with the homeless.

Giving to the needy is a very complex and confusing topic so I’m not passing judgment on you however you’ve decided to handle it. Many people sincerely believe that giving food or money to beggars is counter-productive and actually does them more harm than good—and they can make a good case supporting that view. I’m not going to try to change your mind but I do want to present both sides of the argument and tell you what I’ve decided to do and why. This is already a long post so it’ll be in two parts. Today will be my philosophy and the next one will be specific reasons why I give to beggars.

Reasons NOT to give to Beggars: 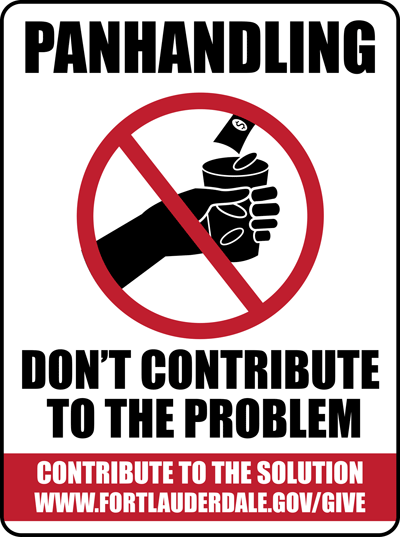 In this post I’m going to give you the single most compelling reason I give to beggars no matter who they are or what they do with the money. Then in another post I’ll answer each of the above objections with my conclusion about them.

Life Needs Meaning: A Life of Service and Love

For me to be truly happy, I believe my life must have a meaning. I think we all know that meeting our basic survival necessities is essential to happiness, but it’s nowhere near enough to make us truly happy. The only meaning that I’ve found that brought me peace, joy and contentment is a life lived in love and service to others. I’ve tried many other things but that’s the only one that has worked. These are some other things I tried:

The first 45 years of my life were dedicated to finding happiness where it’s impossible to find it—big surprise that I was never happy! When my unhappiness reached a point of wrecking my life I was finally willing to do anything to find it. I was very fortunate to find a program that offered me everything I needed.

The living, breathing, heart and soul of the spiritual program I follow is unconditional love—the kind of unconditional love that Jesus describes in the paragraphs above. When I finally took an honest look at myself I found that to some degree my every action with other people was based on selfishness. I was being good to you, for my own gain. Behind my every relationship was an “I’ll love you if ….”

What I learned is that’s not love at all, that’s self-absorption and self-seeking in the guise of love and my life was totally full of it. The program I follow has a code to guide our lives by and it’s very simple, “Love and Tolerance of others is our code” At the end of every night it suggests I do an inventory of myself and one of the questions I need to ask is “Was I loving and Kind toward all.” If not, do I need to make an amends to make it right?

The program I follow describes itself this way. “Simple but not easy, it meant the destruction of self-centeredness.” And that’s the goal of everything in the program; the switch from being “me-centered” to “we-centered.” Of course the reason I follow the program is so I can be happy which is also selfish. There’s no getting around it, there’s always some self in every action, but as I followed the program with my whole heart, it changed me. Even though there is always the selfish desire for a good life even in attempting to be self-less, to a surprising degree there is actually an honest desire for the good of others without the thought of reward. I still fail daily, sometimes hourly, but I claim spiritual progress and not spiritual perfection.

So the bottom line is when I see a beggar, even if there is only a 50-50 chance I’m doing a really good thing by helping them (I’m certain the percentage is much higher) I feel like unconditional love demands that I do it. The fact that they may be deceiving and stealing from me doesn’t offset the demand of unconditional love to feed the least in our society. In my opinion, unconditional love simply doesn’t walk by someone who is starving and do nothing, so neither do I.

Science Agrees with the Need for Self-Transcendence

In 1943 a psychologist named Abraham Maslow published a paper on his theory of developmental psychology in which he proposed that humans had a hierarchy of needs and that as soon as one was met people moved on to fulfill the next level. He developed 5 levels of needs beginning with basic physical needs and moving up to the need to be the very best you could be which he termed as self-actualization. His theory remains popular and widely accepted today.

In the 1970s, after a lifetime of study, he added a 6th level to the hierarchy of needs that he called Self-Transcendence which he described as liberation from egocentricity. It’s the move from being primarily interested in yourself and becoming equally concerned with the well-being of others. Unlike the other needs, be believed you could achieve Self-Transcendence at any time in your life and at any stage of growth.

I believe that the act of consciously connecting with a beggar by giving him a gift of food or money is an act of Self-Transcendence that will elevate every aspect of your life and set you on a path to a better life. At first, I found it was a gift based on guilt and embarrassment, I was giving for the reward I could get of not feeling guilty or hoping it would build up my Karma. But as I made a determined effort to make it a gift based on unconditional love, it changed me.

In my next post on this topic I’ll tell you how I answer the above reasons not to give to beggars.

I've been a full-time VanDweller for 12 years and I love it. I hope to never live in a house again!